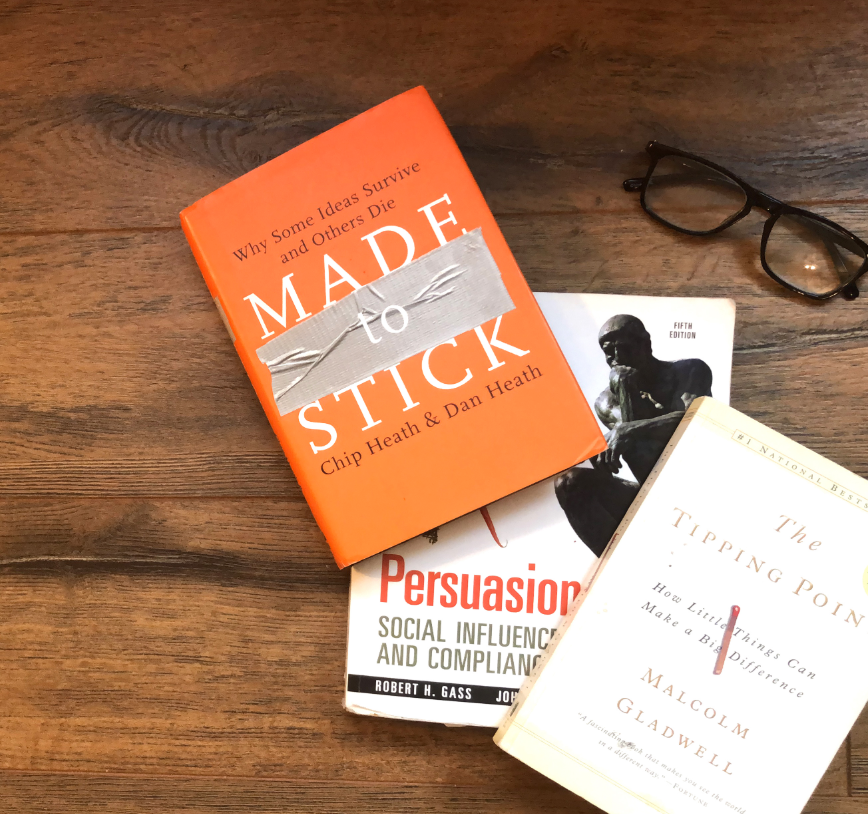 I read three books this spring. Persuasion by Gass & Seiter, The Tipping Point by Malcolm Gladwell, and Made to Stick by the Heath brothers. When it comes to branding, these are the three books I highly recommend. These books will not just entertain you, they will change the way you look at things and brands. I tried that and looked at six posters to see if they changed my perspective. I found these books and what they preach in every single poster.

I have highlighted the relevant parts from the books and tried to condense the learnings from these books into short blogs. These books can be downloaded or bought. If you are hungry for knowledge, consider these your Big Macs. Happy learning.

If you are hungry for knowledge, consider these your Big Macs.

Walmart is
Watching You!

I hate Walmart. It is like my second home. Almost every day I am there because coming back home the Kingstowne Walmart in Alexandria is on my way. At approximately 6 p.m. almost every evening my phone vibrates and I know it is a text from my home. It is either my wife or my mother telling me we have run out of eggs or butter or milk or bread. And even though I walk inside Walmart to buy either eggs or butter or milk, I walk out with a cart full of groceries and a bill that is around a hundred dollars. Talk about persuasion.

Last month my wife asked for some beauty cream which was around 20 dollars. Let me add she is already very beautiful. Just like any other day I walked out with a cart full of groceries and got home hoping for a big thank you from my wife. There was no thank you because there was no cream. The box I paid for was empty. Someone had taken out the cream and left the box.

What I felt at that moment cannot be described in words. Well it can be described, just not with appropriate words. My biggest frustration was how to tell Walmart customer service that I picked up an empty box, paid for it, took it home and did not realize it was empty. Who would believe me?

Walmart is the biggest retail chain in the world and has over 12000 stores.  It makes over $500 billion in sales every year. Although people from all demographics shop there, for Walmart the bullseye audience is a 30-year-old White female who earns around $50,000 annually.

“The retailing giant says that it loses about $3 billion every year from theft”, Reuters reports according to Forbes (Retrieved from https://www.forbes.com/sites/timworstall/2016/08/21/walmart-and-theft-how-much-economically-speakiing-should-walmart-spend-to-cut-it/#5d1465e07643).  So it was great to see the sign pictured above as it was a great example of Compliance Gaining.

This picture is a clear attempt to change a person’s overt behavior. This picture applies one of the five basic types of compliance-gaining strategies. The tactic is Punishing Activity which involves seeking compliance in a negative way like making threats. Source Persuasion: Social Influence and Compliance gaining, Robert H. Gass, John S. Seiter (pg. 238)

I also feel stores like Walmart apply the Broken Windows theory as described by Malcolm Gladwell, in The Tipping Point by keeping their stores clean, bright and updated. “Broken Windows was the brainchild of the criminologists James Q. Wilson and George Kelling. Wilson and Kelling argued that crime is the inevitable result of the disorder. If a window is broken and left unrepaired, people walking by will conclude that no one cares and no one is in charge.” Malcolm Gladwell, The Tipping Point: How Little Things Can Make a Big Difference (pg. 147)

Even John Caples, cited as the greatest copywriter of all time, admits that there are powerful motivations outside narrow self-interest. He has been taught that there are three basic consumer appeals: sex, greed, and fear. Source Chip Heath, Made to Stick: Why Some Ideas Survive and Others Die (pg. 50)

Fear is not just a great appeal to persuade and buy, it is also one of the best tactics for compliance. It works for me and even though I would love to star in a movie someday, I just don’t want to be shot on the Walmart Camera. But I do hope some camera caught the person who stole that cream.